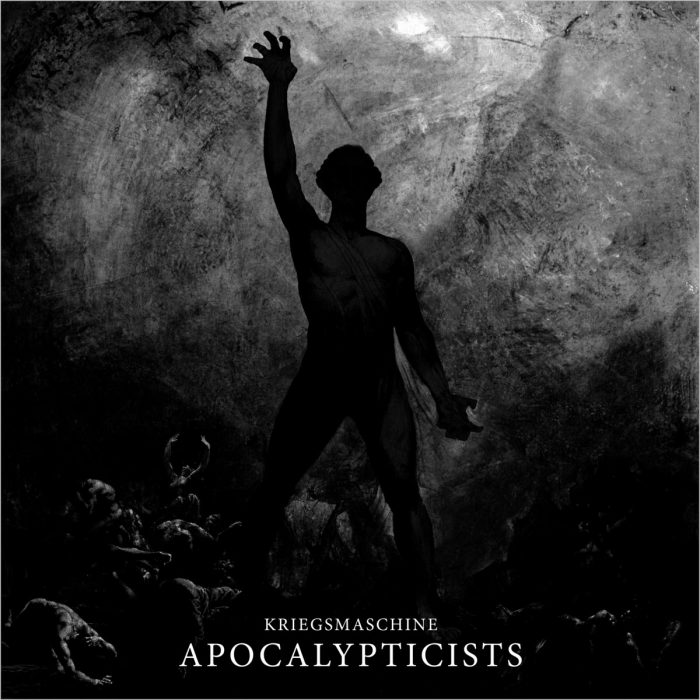 3rd full length album of Kriegsmaschine. Out now on No Solace.

I alone have known all shades of the horror. I am the pit without sun, where blind beasts dwell. I am the revenant at the very bottom of the source. Never to grow weary. Running on doubt. Dead thoughts, dead movements, dead ideals, dead desires. Beneath this world there is another, built of bone and decay. Grey hell. Dry. Motionless. Upon even rows of downfall. Methodized loss. Inherent ruin. Residual blight. For these gates need to be opened. For this shell needs to be broken. Ether guerilla. All hail the alpha fallen. Dead words, dead drives, dead passions, dead urges, dead dreams. As the world above is shrinking, the one below thrives. Cinder springs. Ashen horizon. The sarcastic grinning of gargoyles. The refuge among scattered remains. The temples of iron and concrete. The great death. The silence. The roaring depths of insight. The maze of severance. The golden throne, abandoned. The agony. The strife. The penance. I alone have known all shades of the horror. I alone have seen the rays of lost grace. Residual blight. A sunless pit to crawl in. Ether guerilla. All hail the alpha fallen.

He’d cut himself open. Plant the seeds of plague within. Wear a scripture of scars. Caress the acerbic gangrene. Build on decay. Grow upon failure. Absorb rot. Devour corruption. Feed on ruin. Crawl through the pits. Gaze into gray skies. Swallow the ashen ardor. Tear off the eyelids. Peel the skin away. Coil his limbs into a breathing sculpture. He would become the pallid scourge. Court offender in service of loss. The herald of doom comes in silence. His presence revealed in trembling of history. He would rise a new temple. Paint its walls with refined filth. Burn bricks off crushed lives. Pave the road with lost forgiveness. The herald of doom comes without fanfare. The ashes of empires beneath his feet. Bones of the fallen pulverized to dust. Joined together with spit of the virtuous. Hardened in boiling bile of the holy men. Immersed in the unknown. Tempered in a haze of sulphurous fumes. He would bleed all over this stone. The herald of doom comes with a promise. The true believer craves change. He would cast away his light and his shadow. He would become one with the pallid scourge.

A temporary descent into the depths of the underworld ends up an odyssey through pale Gehinnom. Detached and stray, adrift, frail. No fire to flicker. No shadows to grow. Rite of passage gone wrong. Lost in liminal. Warped patterns. Fractured truths. No shores in sight. No trail ahead. In radiance of a broken prism. Led through scorched earth. Forever in friction. Without purpose. No-way there. No other world and no other truth. No other aim and no other path. No other will and no other fall. No other mind. No other heart. A blind communion. A dirge for the ego. Lost in liminal.

My prophecy is a nightmare. My path is a like a hedge of thorns. On to the burning wastes. On to the great rift. To harvest the bitter fruit and drink from the barren springs. My land is roamed by worms. My teeth is gnashing. A shrine of flesh that had risen. A mind that sparked above the stars. Scorched in the consuming fire in the forges of the nether god. Towards the noumenon. Deprived of both a body and the mind that animates it, the soul is petrified in a monstrous satori. It is hermeticism of the abyss that has trampled it into a blunt instrument of enlightenment. Towards the noumenon. Towards apocalypse. A lifetime of unquenchable thirst and ravenous hunger has carved out an devouring automata. Destroyed by the bitterness of its grievous and long-protracted punishment. My cup runneth dry. My house is divided. On to the burning wastes. On to the great rift. A vast network of fractures. The forecourts of Sheol. The night is as a garment. The face has been obscured. Apex prelest. Conscious nothing. Axis damni. Embers of pneuma. Disunity. Estrangement. The cruelty of the other death.

ON THE ESSENCE OF TRANSFORMATION

This is the nexus of perdition. This is the core of the fall. Worked out arduously in fear, trembling and fever. The body wrecked. The mind shattered. The soul destroyed. Ripe for apocalypse. And everything that constituted yourself, all the things you’ve done and those you could have. The joyous memories, the warmth and the calm. The silly thought that one day a change would come. The naive adolescence, off track with its dreams, but in the end – harmless and innocent. The anecdotes, and digressions and pauses. Those moments of bliss atop the green hills. The illusion of belief, justification and truth. All those things you’ve learned for later, for another life. And every word that could be spoken, every thought that could be born and all that could have been is now no more.