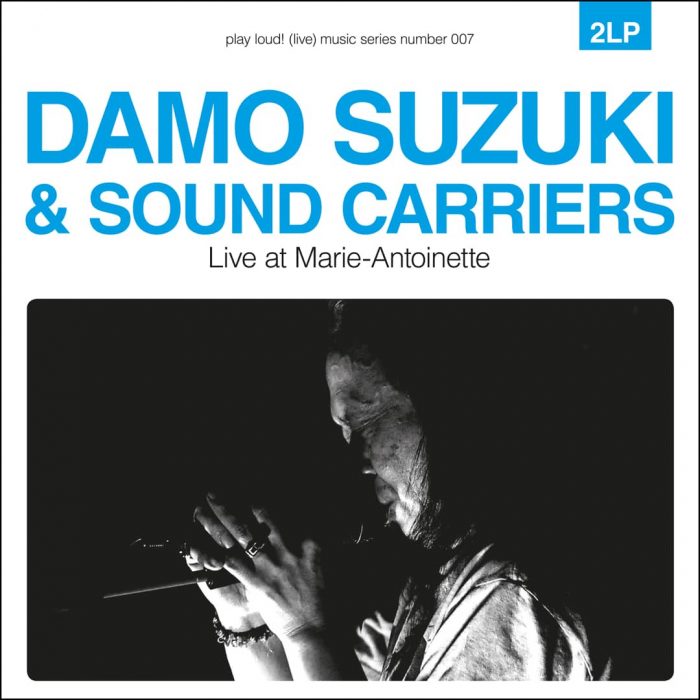 Damo Suzuki toured the world, playing improvised sets with one-off ensembles of local musicians. On this Berlin date in 2011, his Sound Carriers included:

I find it fairly difficult to say something about how the music in this concert came about, cause we didn‘t plan or rehearse anything and hardly were able to hear each other on stage. Wherever it came from, the energy and course of this concert is very much based on group dynamics and an almost telepathic sort of communication, like a swarm of fish. When I mixed the sound later on in the studio I discovered a lot of weird things on the separate tracks: for example Kptmichigan‘s guitar signal is changing level for about +/-30 dB once in a while which is a lot and was probably caused by a broken microphone cable. Luckily the fucked up parts made the sound even heavier and more distorted instead of destroying it.

Concept behind the play loud! (live) music series The “play loud! (live) music series” is based on three precepts: Alan Lomax‘s work as an archivist and chronicler, John Peel‘s BBC radio sessions, and the work of Direct Cinema pioneers, such as the Maysles Brothers, Leacock, Wildenhahn and Pennebaker. Filming live shows means not doing things TV-style, but in a very personal, intuitive and adventurous manner – nothing is staged for the shoot. You go along with things as they happen. Some of the live performances are filmed with only one camera in one continuous shot and without any edits. Some critics have dubbed it “filmed painting/painted film”. play loud!’s music films have been called: “raw”, “rough”, “canny”, “straightforward”, “adventurous”, “witty”, “in- sightful”, “direct”, “non-tricksy”, “economic”, “minimal”, “unpretentious handheld camera work”, “artful film paintings“ … play loud!’s intention is it to create an extensive archive of interesting popular music and culture that includes both, the huge quantity of unreleased filmed material by the filmmakers and also material that comes from other sources. The possibility of streaming films offers the opportunity that fans, investigators, scientists, re- searchers, journalists and other people interested, have access to the archive and to support the possible use of the material for others. To cover the immense costs of such a private archive, the archived material can be previewed by paying a small fee. Some of the recordings – if popular demand is strong – will be offered as limited vinyl LPs. “Shooting live music is the most purely cinematic thing you can do.” (Jonathan Demme)