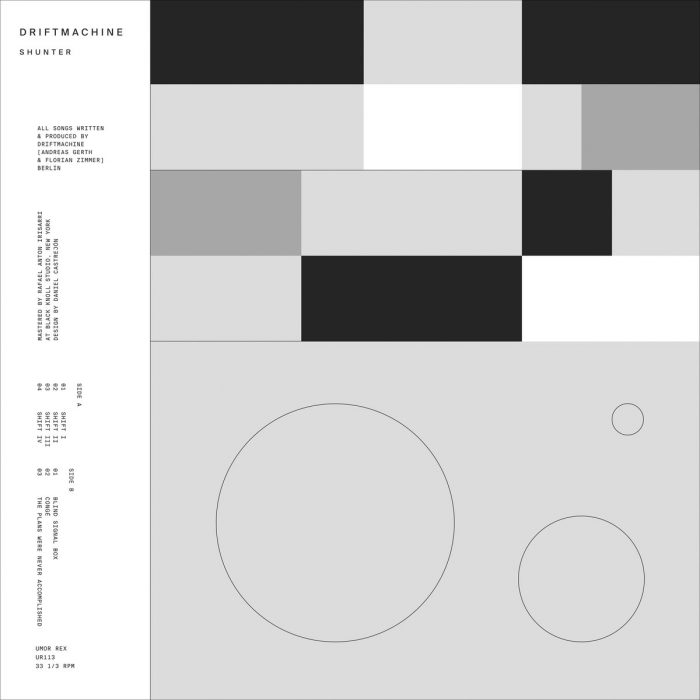 Shunter, the new album by the Berlin-based duo, is their most ambitious work to date. Although instantly recognizable, featuring their trademark Kosmische and Avant-garde sounds, it also presents a new journey into abstract and hallucinatory worlds. Filled with eerie textures, their electronic visions are darker and more vaporous than ever. LP limited edition with free download coupon.

Driftmachine’s fifth album (also the fifth one for Umor Rex) offers a new perspective on their ample sound spectrum and systemic narratives. Shunter overlaps and mutates their post-industrial-dub motives. It was conceived and produced in search of a very different kind of imagery, with sections of noise and field recordings intersecting with analogue sounds; a mixture of contrasted fragments, where the usual creative process of modular-synthesis leads Gerth and Zimmer to the discovery of a dark, hazy and diffused experience. There is a protean quality to the rhythmic elements, with tempos constantly contracting and expanding, a departure from the mono-beat-rhythms of Nocturnes and Colliding Contours.

The first half of Shunter is made of four pieces named “Shift”; although individually separated, they are conceptually linked and can be understood as a sort of score. Imagine a late stage of the industrial revolution, with the interaction between heavy machinery and human beings. The second half of the album is not completely separated, but it has three other substantial melodic moments. Somewhere between the hauntological and the realms of archive-music, a huge range of subterranean beats and distinct patterns dotting the landscape of early electronic and post dub music.