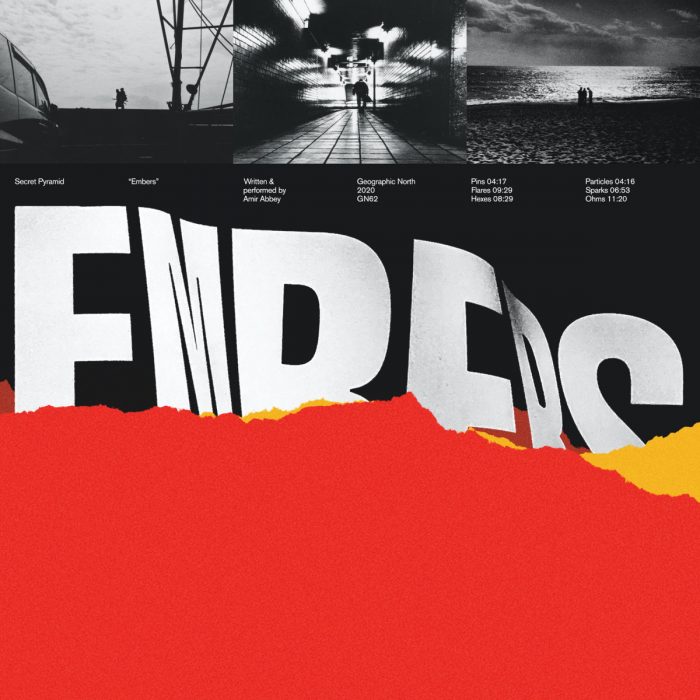 Secret Pyramid is the nom de nocturne of Vancouver, BC’s resident ambient explorer Amir Abbey. Having perfected his brand of elegant elegia over the past decade heard on albums released by illustrious imprints as Students of Decay, Ba-Da-Bing!, and Nice Up International and collaborated with the likes of Loscil, Abbey makes his Geographic North debut with Embers, Secret Pyramid’s most sincerely solemn and curiously calming work to date.

Embers’ six pieces find Abbey furroughing a few of his most trusted tools (including Ondes Martenot, sampler, Space Echo, two tape machines, and a computer), while taking a more compositional approach than his past works. This method opened entirely new aural possibilities and allowed Abbey to consider, manipulate, and re-consider each passing tone. The end result is an exquisitely enveloping work of contemporary ambient music that is equally inspired by and spiritually linked to influential French composer Olivier Messiaen, the progenitors of Dub, and a number of ephemeral oddities in between.

Sonically, Embers reveals some of Secret Pyramid’s most minimal and open works yet. Certain pieces (such as “Pins,” “Particles,” and “Ohms”) employ a single instrument or sound source with only a modicum of manipulation. This “less is more” approach gave each sound actual room to breathe and find a balance of beauty and dissonance, and the magical transition between the two.

Emotionally, the music was created during a particularly turbulent time in Abbey’s life, allowing him to process things musically. In his own words, “It’s a reflection of the impermanent, shifting, and fleeting aspects of our lives, both the good and the bad, that often spark something inside of us. Aspects of our daily existence, and the self (whether our emotions, surroundings, relationships,) that are constantly morphing, disappearing, reappearing, burning out, reigniting, and so forth, metaphorically like flares or embers.”