Six Organs of Admittance – Shelter From The Ash 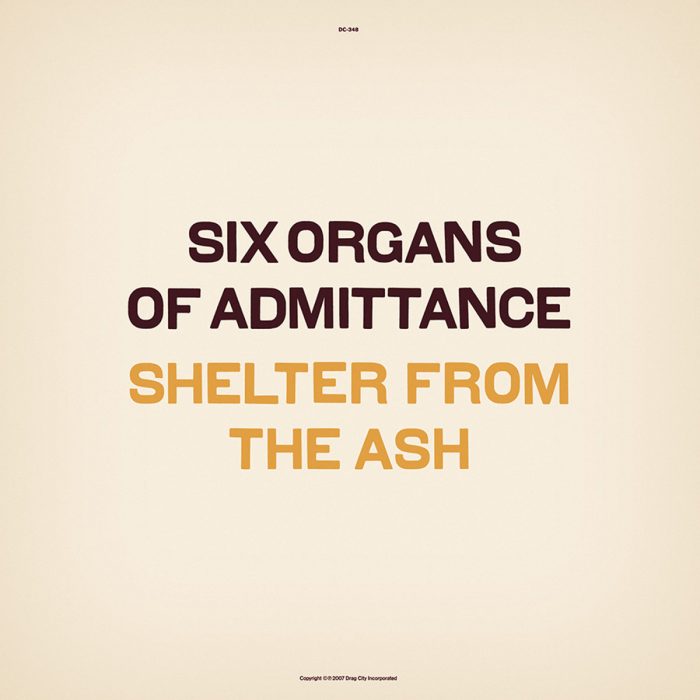 Music for those post-apocalyptic dreams we’re all having. The ones where you’re stumbling through the desert with one leg bandaged from the last coyote attack. These songs are what you’re humming in that dream. Take shelter and find comfort.

“Oh those halcyon days of yore making Shelter From the Ash. Who could forget shopping for young coconut with Dan K (not a euphemism), the search for a bullwhip to make just that perfect emotionally resonant whipsnap sound on the record (idea later abandoned, for the best), and the magical 4th of July coming back from the studio where we briefly looked at the sky from the hilly road near Tim’s and then scuttled home to avoid the ‘craziness’ of the Mission (read: non-white people with firecrackers?). LA/NY studio hound and impresario Matt Sweeney came in and took out a small foil package from his pocket before recording. It turned out to be 20-dollar raw chocolate and he nailed his solo so fast time actually went backward to before he had arrived, meanwhile I struggled vainly, lacking both pro-gear, and most especially pro-attitude, punching and chewing on wires until the guitar shorted out and I fainted (the take where I got electrocuted is the one they kept). Ben was composing a master epic in his brain, Popol Vuh french kissing all the characters in Dune; of course the exciting flutter of joy at creation, the driving thrum of communicating a private inner world through song. It was a heady time, I tell you.”