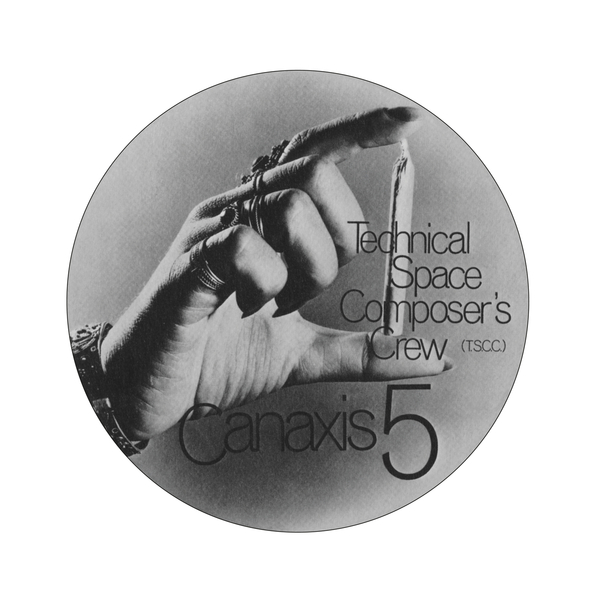 Inspired by his studies with Karlheinz Stockhausen, fascination with radios, electronics and multi-tracking studio and collage techniques, Holger Czukay together with one Rolf Dammers (a technician/engineer) decided to try and create their own such works.

From the back cover:

CANAXIS 5 was written in the light year 77, sometimes called the year of Galactical Score Expedition.

Time elapsed between the first founding of the lunar calendar with with the man’s first cough on the moon cow settlement. Leaving behind a flag that waved in a strong moon storm! Plastic man turned himself around on the planet of the moon, trying to reach CANAXIS 5, which is the galaxy of the sound expedition?

It was lightning’s stroke procedure onto a 45 track recorder, engineered by the robots Ho and Ro. Their laboratory was a stationary space with an orbit outside of the planet KO ––– , produced with a better equipment which was connected electronically with the Inner Space Production’s Sound Space Team in a little village in Vietnam. There you can find a secret computer center of all greater kinds of coloured lightnings.

The voices of the women singing on track A1 were taken from Various – Music Of Viet Nam (1965), A side, track #7. So track A1 should not be named Ho-Mai-Nhi (The Boat Woman Song) but Doh Dam Tara (Love Song). This song belongs to the traditions of the Cham people, based in southern Viet Nam and Cambodia.