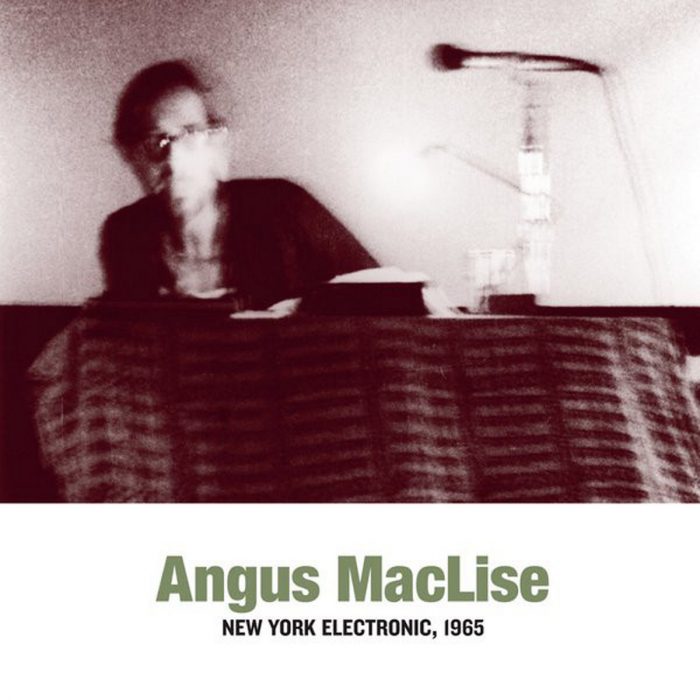 Drone-based experiments (notably with Tony Conrad, extremely present on the album, and John Cale), and purely electronic compositions – a path (almost) nobody knew MacLise had explored. Miraculously salvaged by Gerald Malanga, these archives provided a new perspective on the artist’s whole body of work and expanded considerably his artistic palette. And so we are now able to draw a whole record’s worth from MacLise’s early electronic music.

Angus MacLise, born, March 4,1938 in Bridgeport, Connecticut, was a percussionist composer, poet, and calligrapher. He was a member of La Monte Young’s Theater of Eternal Music, with John Cale, Tony Conrad, Marian Zazeela and sometimes Terry Riley. He contributed to the early Fluxus newspaper V Tre, edited by George Brecht and George Maciunas, and was also an early member of The Velvet Underground, having been brought into the group by flatmate John Cale when they were living at 56 Ludlow Street in Manhattan. MacLise played bongos and hand drums during 1965 with the first incarnation of the Velvet Underground. Although the band regularly extemporised soundtracks to underground films during this era (The Invasion of Thunderbolt Pagoda by Ira Cohen, Chumlum by Ron Rice…), MacLise never officially recorded with them. Later in the 1960s, Angus and his wife Hetty traveled around between Vancouver, Paris, Greece and India, finally settling in Nepal. They also had a son, Ossian Kennard MacLise, who was recognized by Rangjung Rigpe Dorje, the 16th Karmapa, as a reincarnation of a Tibetan saint, or tulku, and at age four became a Buddhist monk.

MacLise died of hypoglycemia and pulmonary tuberculosis in Kathmandu in 1979, aged 41. He recorded a vast amount of music that went largely unreleased until 1999. These recordings, produced between the mid-’60s and the late-’70s, consist of tribal trance workouts, spoken word, poetry, drones and electronics, as well as many collaborations with his wife Hetty. In 2008, Hetty MacLise bequeathed a collection of her husband’s tapes to the Yale Collection of American Literature.