TwinSisterMoon – When Stars Glide Through Solid 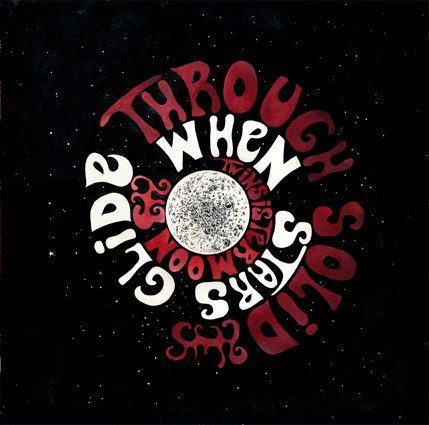 Long awaited reissue of the debut release from Mehdi Amezianes Twinsistermoon project, originally released as a gorgeous handmade self released CDR in 2007, to many of Natural Snow Buildings and each of their solo project, this is the pick of all their releases, which is rather ironic being that its one of the smallest release runs in the discography of all the Natural Snow Buildings and related projects, it is infact the most limited release of all the Twinsistermoon releases.

But due to the massive level of word of mouth about their releases on blogs and in the smaller press publications this release has become one of those holy grail releases. Unless of course you have a small wedge of cash lying around doing nothing.

So, finally, and with great pleasure, the much talked of reissue is finally here. The record opens with a real stunner, ‘I Wish I Could Drown The World In Reverberation’ is a trance inducing piece, with percussive tambourine, dreamy vocals, and shimmering strings, with a gorgeous organic rich feeling. It’s followed by ‘To Breath Underwater’, a more pastoral folk song, akin to some late 60s/early 70s folk artists. The album as a whole focuses more on the song based material which occasionally venture into the more far out zone outs.

The CD reissue features an additional bonus track, which is exclusive to the CD edition and is packaged in a beautiful gatefold sleeve featuring stunning new artwork by Solange Gularte.