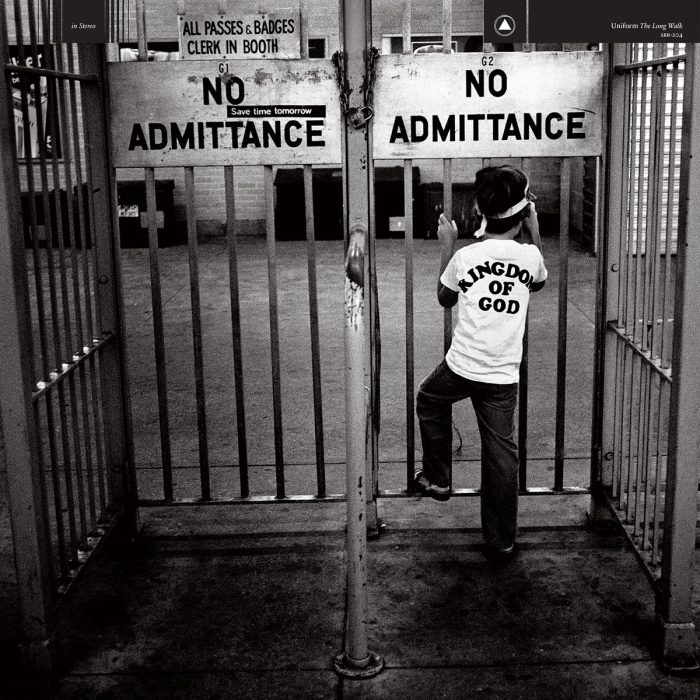 Following the release of critically acclaimed LP Wake in Fright, which had two songs featured in the new season of David Lynch’s Twin Peaks, it was time for Uniform vocalist Michael Berdan and instrumentalist Ben Greenberg to return to the studio. The duo decided to up the ante and add a third member to help perfect their vicious post-industrial dystopian cyber-punk. After some deliberation, Greenberg called upon drummer Greg Fox (Liturgy, Zs) to help round out the sound they were looking for. Using a mix of triggered samples and real drums along with layered synths and good old electric guitar, the trio arrived at what would become The Long Walk after only a few short days in the studio.

From the opening whirr of the title track, it’s clear that the band is onto something special. Recorded in Strange Weather studios in the first part of 2018, The Long Walk is eight new tracks by the duo of Greenberg and Berdan, incorporating Fox’s skills behind the drum kit to add an entirely new dimension to the signature Uniform sound. Ditching sequenced tracks, Greenberg opted for single takes to highlight the Frankenstein-like guitar-bass-synth hybrid that oozes throughout the recording. Meanwhile, crushing guitar thunder is punched up by Fox’s masterful drumming while Berdan’s cries from the nether feel more desperate and morose than ever. This is Uniform at its most bleak, emotional, and powerful.