Kammerflimmer Kollektief ‎– There Are Actions… 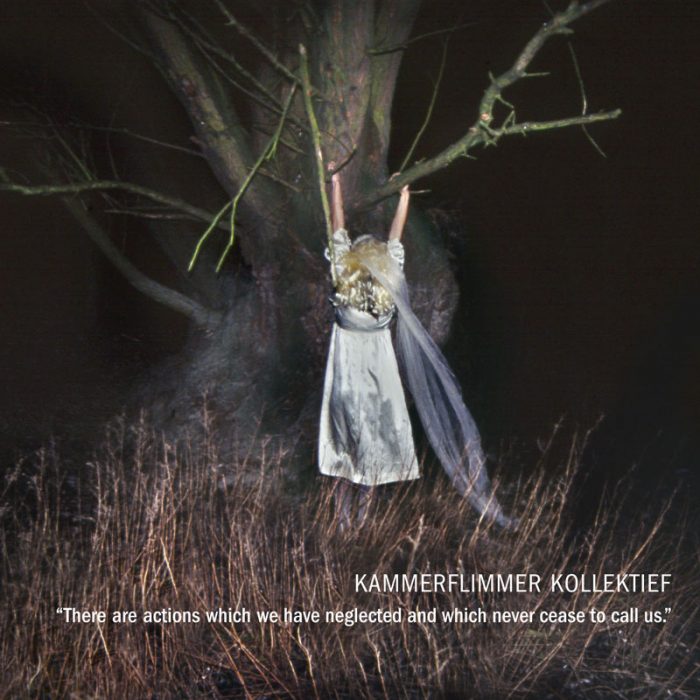 There Are Actions Which We Have Neglected And Which Never Cease To Call Us.

“Every song written or improvised has an inside song which lives in the shadows, in-between the sounds and silences and behind the words, pulsating, waiting to be reborn as a new song.”

William Parker, I Plan To Stay A Believer (liner notes)

After 20 years of Kammerflimmer Kollektief, with 10 albums thus far, the time has come to take a trip. The Karlsruhe combo guide us through seven stations in an unfathomable Terra Incognita, where a listening space emerges at the intersection of improvisation and composition, a space where certitude slips out of reach, jouncing incessantly between precision and freedom, oscillating furiously between cut-up and palimpsest – and, just when we think we may have pinned it down, disappears altogether.

This album entitled “There are actions which we have neglected and which never cease to call us.” is one for the fearless: wordlessly conjuring up enchanted places in the richest of tones, simultaneously confronting us with magic which captivates us and the excruciating realisation that we may never be released from its spell.

Mirror images come into view, images of ourselves: driven away, tormented by feelings of guilt, frozen in powerlessness – even when we believe we are still moving. There is always a mountain of things missed, calling out to us! The wetlands of the Upper Rhine Plain (“In my heart there’s a place called swampland!”). Cuernavaca in the Mexican highlands. A Southern Californian stretch of Pacific coast. The Baltic Coast in Mecklenburg. A bunch of haunted places – all scenes of melancholy within us, between longing and memory, repeatedly searching for acts of liberation. This may not be the record to set us free. But it offers us a soundtrack for our melancholic state.

One thing is clear when it comes to the Kammerflimmer Kollektief. Regardless of any interpretive traps snapping shut, or the conceptual penetration of apparently pre-conceptual musical factuality: here is something which cannot be voiced: avant-garde, improvisation, psychedelia, whichever labels are stuck on the Karlsruhe collective, they all feel patently unsatisfactory. Like all music, their music can neither be narrowed down to concepts nor fixed semantically. It cannot be organised as language, with a sound or image corresponding to specific points observed by sender and recipient alike, yet it is no more pre-conceptual in the sense of: first come the conditions of music, then one learns to discuss them. The Karlsruhe artists practise other-conceptuality. This is cata-language. Music from who the fuck knows where.

These carefully unconsidered atheist jam supplications lead us into the darkest corners of our souls. Out of the night and into the night. The bass of Johannes Frisch creaks and hums, evolving into barely discernible undergrowth with a life of its own, yet still becoming the foundation of everything – a basso continuo, constantly leading into nothingness. Heike Aumüller’s harmonium recognizes its original calling as aerophone and is elementally: wind. A wind which has so much to tell us: about the good and true sides of life, but even more about what tortures us, leaves us restless. Comforter and painful wound in one. Thomas Weber’s whirring guitars and gadgets drag us into a wondrously reverberating space of special effects – protection is not all this underbrush may grant us.

Amidst all the excitement which awaits us on this short, yet infinite journey, it is worth remembering: as the shaman hangs out his magic roots to dry in the morning as preparation for the ritual ecstasy of the evening, so the Kollektief follow an everyday principle in their own ritual. In short: Be not afeard!